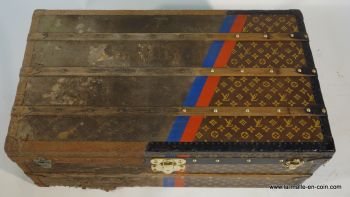 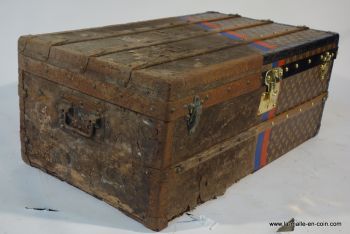 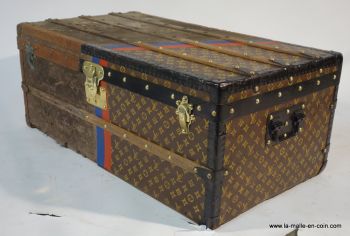 Several years ago, someone from a major luxury brand, looking at the photos of a restoration work, had said to me:
“It’s super, but, as I have no photos showing the previous condition, I cannot make out enough the work that has been done”.

That had given me an idea that we have just carried out.

The canvas of the trunk is the original. It has only been fixed and some little parts have been replaced.

All the parts of the trunk are original. Only restoration has been done (lock excepted, see below).

The stables strips have been painted only to delimit the two areas.

The missing lock has been replaced by a cast brass one that we have made according to the sand casting process
.
Then it has been treated, polished, assembled piece by piece and riveted again as it was originally.

It is functional without mechanism. Of course it bears no logo, as it is not original.

Reminder: Should we allow ourselves to affix a LV logo, we would be making counterfeit.

Obviously enough that item is not for sale, but only meant to show our ability for refurbishing.

It will be exhibited under glass in the Musée du Bagage.