How beautiful the lineage of the camphor tree!

It is a tree from the Lauraceae family, just like the laurels (laurus) that we know in this country.

Restoration tip: very little stripping (old varnish) or sanding (or even not at all) is needed on a camphor wood trunk.

A French polish will highlight the veins of the wood.

That is why at one time the camphor tree was called Laurus camphora. 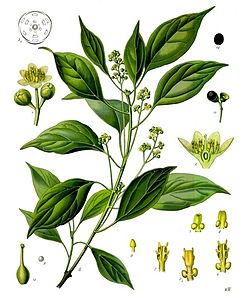 Today, its Latin name is Cinnamomum camphora; it is from this tree that derives this beautiful wood with such a nice luster,

such a powerful scent, and with which, in China and India, were made the naval officers'  trunks and chests.

Decorative with its evergreen foliage, the camphor tree is often planted along the streets in hot countries.

The essential oil extracted from the leaves of the camphor trees acclimatized to Madagascar is the "ravintsara", considered in aromatherapy

as a major antiviral and as an excellent immunostimulant and antidepressant,

The wood from the Camphor tree, the particular scent of which resists for several years, acts as a fungicide against moths.

For this reason, it has long been used by luggage manufacturers to make trunks for transporting furs.

The camphor tree is a fast growing tree in the subtropical zone, with evergreen foliage.

and the green color imposes over time.

The flowers are yellowish-white and give small glossy black berries when ripe.

It is a beautiful tree with an ample top, reaching 35 m height in its natural state, on a short and powerful trunk.

It can be used as an ornamental tree; it is found on the Côte d'Azur and in the Mediterranean basin; it is smaller, around 20 m.

It is obtained by peeling the bark of the finest branches; the bark is then dried and produces these so characteristic sticks.