A visionary woman
Pauline Moynat, a visionary and the only woman trunk-maker in history, founded Moynat in 1849, and soon made the house the most Parisian among the French leather goods and trunk makers of her time.

Founded at the time of the establishment of the French railway system, the house registered innumerable patents, especially for train luggage. Later as a pioneer in the automobile adventure, Moynat specialized in custom-made trunks that fitted the contours and were matched to the colour of the car body. The most famous example is the Limousine trunk patented in 1902, and never copied.
n the Moynat history, many creations begin with a beautiful rencontre or encounter, from the friendship between Pauline Moynat and Gabrielle Réjane in the late 19th century to artistic director Ramesh Nair’s creations for the musician Pharrell Williams.

Moynat, official supplier to the Parisian theatres
Pauline arrived in Paris from Savoy at the young age of 16 and later transformed a male-dominated universe in an entirely unique way. Pauline had two passions, both of which emanated from Paris itself and they have remained at the heart of Moynat and its creations from the outset: the Paris elegance and superior refinement, the Paris of culture and epicurean delights, and the Paris of the theatre.
This cult of Paris and the theatre world was reflected in the address chosen for the first Moynat boutique: 5 Place du Théâtre Français and 1 Avenue de l’Opéra, a few steps from the Comédie Française. Moynat became the official supplier of the Parisian theatres.
However, it was above all the friendship that Pauline shared with famous actress Gabrielle Réjane that crystallized the Parisian spirit of the House. Réjane was a woman of character, independent and full of charm and humour, and was a loyal client who inspired the first bag for women created by the Maison. In 1903, Moynat created the Réjane bag in her honour; it was the first bag to pay homage to a celebrity.

The great automobile adventure
At the turn of the 20th century came the automobile. As this revolutionary vehicle took the world by storm, Moynat applied its expertise to produce the trunks that fit the evolving lifestyle of its clientele. Driving became a glamorous mode of transportation that implied independence, adventure and daring.
The House’s ability to address the needs of its clientele made it the trunk-maker of choice for many manufacturers. From carriers for spare wheels to sliding compartments along the side, new designs followed desires and dreams on the road.
Foremost among these innovations is the Limousine trunk, patented in 1902, with its distinctive curve designed to espouse the contours of an automobile, without the use of a metal rack.
True to Pauline Moynat’s desire to respect the aesthetics and design of the automobile, this patented innovation allowed the House to offer a harmonious fit between a vehicle and its trunk. 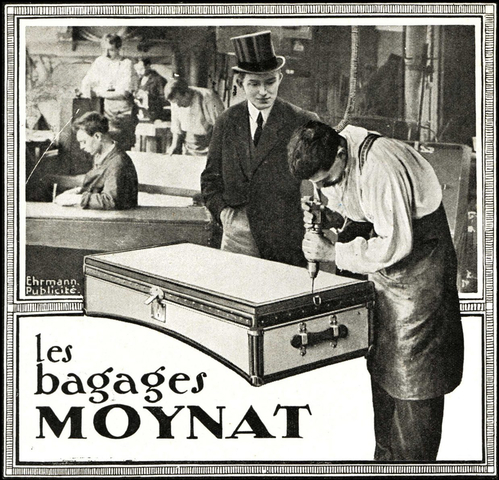 Henri Rapin’s professional collaboration with the Maison Moynat at the beginning of the 20th century was also a story of friendship. A former pupil of the painter Jean-Léon Gérôme, Rapin would inspire and lead the house’s graphic evolution: from labels on the theme of travelling to poetic or comic logos, such as the one depicting passengers embarking on a junk in a stormy sea, Rapin was the inventor of the toile initiale Moynat Paris, a motif formed by alternating lines in the letter “M”. Initially a simple means of protecting the house from copies, the discreet, elegant monogram became its signature.

A regular participant of World’s Fairs, Moynat captured hearts and minds at the 1925 “Exposition Internationale des Arts décoratifs et industriels modernes” in Paris. A landmark exhibition in defining the Art Deco period’s progress in architecture and decorative arts of the times, it unveiled the avant-garde and exceptional creativity of this pivotal period.

Not only did the House win multiple medals for its innovative designs but its exceptional “Malle en maroquin rouge” was awarded a “Diplôme d’Honneur”. Dressed in a distinctive leather patchwork and studs, this award-winning masterpiece was the creation of Henri Rapin and was instrumental in consolidating the myth of the house with an ever-growing international audience.
Leather marquetry, a unique and specialised technique better known in woodwork, has been adapted by Moynat and applied to leather with a level of perfection seldom achieved elsewhere.