Here is the story of the luxury brand DIOR :

Created in 1946 by Marcel Boussac, the Christian Dior Couture subsidiary, labeled "haute couture" owes its name to the great couturier, Christian Dior. Expanded over the years to the cosmetics, perfume, watchmaking and jewelry, leather goods and wine sectors, it has become one of the most important companies in the luxury world.

Since 2017, the subsidiary has been an integral part of the LVMH group.

It was in 1947 that the brand's first haute couture show was born. Thanks to the techniques of the brand's first tailor, Pierre Cardin, the collection of this first emblematic fashion show put forward a brand new look on the female silhouette: cinched waist, high and round chest, covered legs... Which will give birth to the iconic piece of the summer 1947 that received the Oscar of the house Neiman Marcus: the Bar Suit. This is the influence of the New Look.

Between 1950 and 1953, his collections take a new turn with a style highlighting the lengths, a little marked waist and curves less voluptuous.

In 1954, this trend of absence of curves is accentuated and gives birth to the H collection.

These are three major periods that have marked the history of the brand's collections, whose founder quickly saw the growth of this market, especially in the United States.

In parallel to the launch of his haute couture collections, Christian Dior developed his perfume company, seen as an obvious choice: "it is as important for a woman to have a subtle perfume as elegant clothes". It is thus directly in 1947 that the first fragrance, Miss Dior, is born.

Very quickly, Christian Dior multiplied his actions in order to make himself known and known all over the world: the opening of Christian Dior New York Inc, public relations offices. He organized fashion shows all over the world and became the designer for many stars of his time: Marlene Dietrich, Liz Taylor, Ava Gardner and Marilyn Monroe. He was also the first to set up the licensing system, allowing manufacturers of accessories to brand their products with his name.

All his actions allowed him, in only 11 years, to become a figure of the radiant entrepreneur in the world of luxury, all over the world and thus to sell more than one hundred thousand dresses in his 160 stores around the world.

The brand also owes its success to the diversity of its products and the creativity of its designers.

The House of Christian Dior has become a pioneer in the luxury market and its codes: by its creations highlighting excess, quality, passion, but also innovation, culture, dreams and artistic sensitivity. 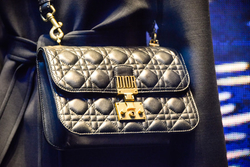