To the shop Printemps

“Au Printemps” is a somewhat surprising choice of names for a department store. 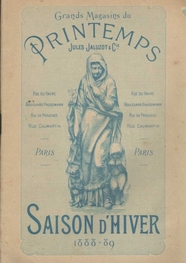 According to Eric Fotorino, “a few years earlier, on the boulevards where Haussmann was just breaking through, a play had carved out a great popular success. It was called "Au Printemps". It is quite simply that Jules Jalouzot makes it his brand ([1]). It is true that the wife of Jules Jaluzot, Augustine Figeac was a theater actress, member of the Comédie Française. It could have inspired him to make this choice. But it is quite possible that this name “Au Printemps” is simply linked to the slogan chosen by Jules Jaluzot to attract his customers: “Everything is new, fresh and pretty”, like the season itself.

Looking at the facade of the “Printemps” today, it is difficult to imagine that in 1865 the very first store opened by the two partners, Jules Jaluzot and Jean-Alfred Duclos, only occupied the ground floor. , the first floor and the basements of a newly constructed building on a crossroads on Boulevard Haussmann. It was Augustine Jaluzot who had it built: when she got married in 1864, she had a considerable fortune for the time. This is precisely what enabled her husband, ten years younger than her, to embark on the adventure. Jules Jaluzot had previously studied in commerce, notably at the “Bon Marché”. He entered it after wandering around other Parisian stores, following studies which seem to have been excellent. Son of a provincial notary, he had even been admitted to Saint-Cyr. Yet, without knowing the reason for his choice, he had entered, not in the military career, but in commerce.

The building Augustine had built was an investment property: a particularly visible store on the ground floor, and apartments for rent upstairs. He even had stables, since Printemps delivered its wealthy customers to their homes. But very quickly after it started in 1865, the activity spread to the other floors and spread to the surrounding houses in proportion to an ever-increasing number of customers and goods. Metal bridges connect these different buildings and elevators allow buyers - especially buyers - to move effortlessly from one floor to the next. Invented by J. Jaluzot, fixed-date sales, advertised with a lot of publicity, attract crowds and increase the reputation of Printemps.

The momentum was temporarily slowed down in 1881. Due to the clumsiness of an employee, early in the morning, the curtains ignited, the building was destroyed. Jules and Augustine Jaluzot then lived in the premises, like other employees, as was customary at the time. They are safe and sound, but Augustine will never recover from this tragedy and will die two years later. She was approaching her 60th birthday.

Jules Jaluzot immediately set about reviving a new "Spring" from the ashes, resolutely modern since it already included electric lighting, a revolutionary comfort for the time. The footprint of the building is such that it constitutes a single large entity bordered by four streets, including the still famous Boulevard Haussmann. J. Jaluzot also remakes his private life by marrying one of his employees, Andrée Dubois. After first marrying a bride 10 years older, this time the bride is 20 years her junior.

At the turn of the 20th century, mail order sales were doing well, exports too, branches were opened abroad. Jules Jaluzot's fortune is considerable, but he is not satisfied with managing it "like a good father". In 1904, he launched into sugar speculations that would ruin him. The case is complex, because it mixes international rivalries, investments in Egypt, manipulation of stock prices, market players intervening behind the scenes, etc. The crash is resounding, one of the protagonists will even kill himself. For his part, Jules Jaluzot must leave the management of Printemps, because he had drawn money from the cashier of the store to fuel his personal speculations. His property - including his very beautiful mansion - was seized and sold. Jules Jaluzot retired to his birthplace, to Corvol’s Proud, in the Nièvre area. It was nevertheless in Paris that he died, during a visit to his daughter, at the beginning of 1916. Before that, he would have the sorrow of losing his son, who died at the front in the first months of the war. from 14-18.

Auguste Laguionie, who was already seconding Jules Jaluzot, became the new leader of "Printemps" in 1904. He immediately implemented ideas which further increased the size of the store and gave it new impetus, before his son succeeded him. The latter, named Pierre, will in turn have to rebuild the Printemps after another fire in 1921.

1865 Creation of the “Grands Magasins du Printemps” by Jules Jaluzot and Jean-Alfred Duclos, at the corner of Boulevard Haussmann and Rue du Havre. Jean-Alfred Duclos quickly leaves this association and J. Jaluzot will continue on his own

1881 A fire largely devastates the building

1883 The new Printemps building is inaugurated

1904 Jules Jaluzot resigns following enormous financial difficulties caused by his sugar speculations, which ended in a crash in which he would have lost nearly 15 million francs. Gustave Laguionie succeeds him as director

1910 A second store, the current "Printemps Haussmann", the construction of which was decided by G. Laguionie in 1906, is inaugurated

1920 When Gustave Laguionie died, his son Pierre succeeded him.

1921 A fire destroys part of the store inaugurated in 1910. A reconstruction is immediately started

1928 Spring begins to spread in the provinces

1972 The “Printemps” group is acquired by Maus Frères, a Swiss holding company of commercial companies

2013 DISA, a Luxembourg investment company owned by Qatari private interests, acquires Printemps. Stores abroad are closed, as are some stores in France. A new CEO, arriving in 2020, announces that Printemps could reopen stores abroad, starting with Doha, Qatar.

The cover of the 1888-89 winter catalog features an engraving by a very famous artist of the time, Henri Chapu. A student of Fine Arts, winner of the Prix de Rome, Chapu became under the 3rd Republic one of the most requested sculptors for official commissions. His works adorn many Parisian buildings, such as the Hôtel de Ville, the Opéra Garnier, the Palais de Justice, the Gare du Nord, etc. and the facade of the “Au Printemps” department store, Boulevard Haussmann.

At the request of Jules Jaluzot, owner of Printemps, Henri Chapu sculpts the allegory of the four seasons to decorate the facade, during the reconstruction which follows the fire of 1881. It is precisely an engraving showing the statue of Winter which adorns the catalog of the winter season 1888-89. This is to say the vision that J. Jaluzot had for his company. Resuming sculpture in the form of an engraving for a catalog distributed throughout the country testified to the fame of its business, already on the way to becoming almost an institution. 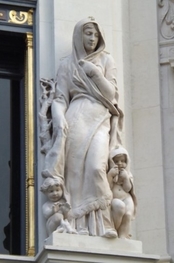 In 1903/1904, when Jules Jaluzot was almost ruined following speculation on sugar, his many real estate and works of art were seized and dispersed at auction. In 1905, at the Hôtel Drouot, paintings by Courbet and Jongkind, furniture, bronzes, old marbles, medals and a good number of objects were sold, all of which testified to the fortune and taste for art of the founder of "Printemps".

Who still knows that little boys, before wearing pants, first wore dresses? The catalog offers a few, and often, between those for girls and boys, only the first name assigned to the model allows to know that the garment is male. In the illustrations themselves, distinguishing the two is difficult, because in addition to dresses, boys often kept their hair long until they were 4 or 5 years old. 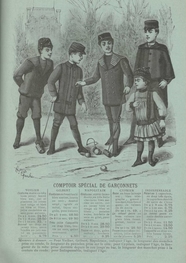 Reflecting its time, the catalog presents girls' clothes whose shapes are very similar to those for adult women, including a "bust", a sort of half-crinoline intended to create a very plump effect on the lower back. Associated with the laced corset, this accessory aims to accentuate the delicacy of the waist. The catalog specifies that these corsets for adults are from "0.46m to 0.76m in waist width" and that any other measurement requires ordering them! 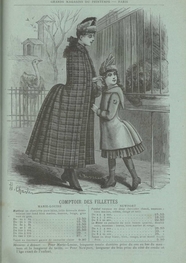 Corsets are also offered for sale for girls aged 10 to 13 - this is not a simple undergarment, but indeed an early form of restraint, since the model has a "back. boned with comb ”, therefore already rigid. Very young, between corsets and wearing the bust, the girls are physically adapted to a fashion that reflects the customs of the time, very constrained for the fairer sex. As for the "baby corset", it is a somewhat rigid garment, which was to prevent the spine from deforming. It was put on babies as soon as they started to sit up. These clothes are offered by all department stores and therefore naturally appear in the Galeries Lafayette catalog. 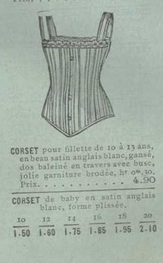 [1] Eric Fottorino in a series of reports devoted to the start of large French companies, published in Le Monde between July 20 and September 5, 1995